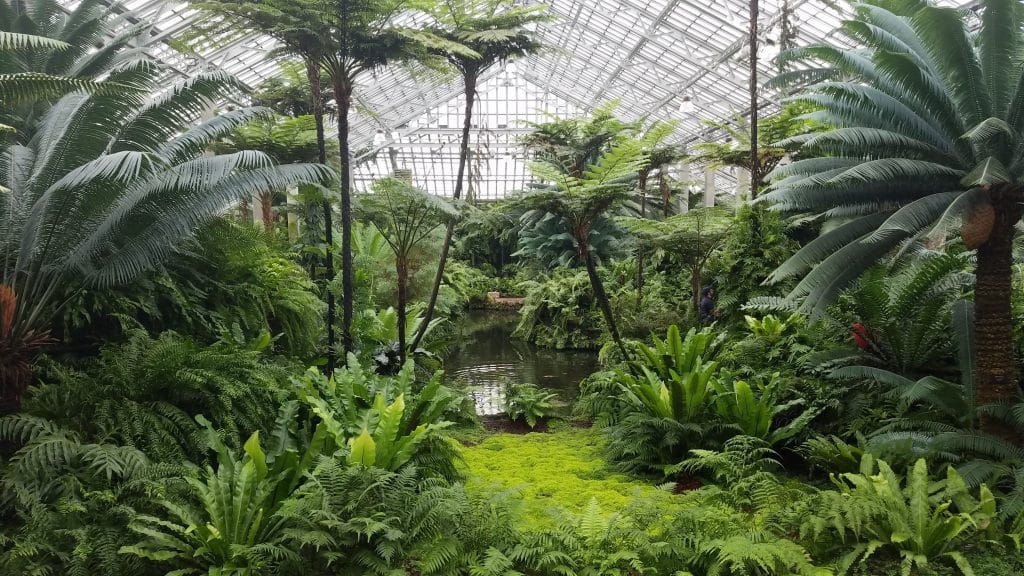 One of Chicago’s many spectacular visitor attractions, the Conservatory is located about ten minutes west of downtown. You’ll find it conveniently located just north of the Eisenhower Expressway (Interstate 90) tucked into a Chicago urban neighborhood …

The Conservatory is actually a park of the city’s famous Garfield Park, an expansive green space which has served as a west side oasis for over 15 years. The park was renamed early in its existence in honor of slain U.S. President James Garfield in 1881 … 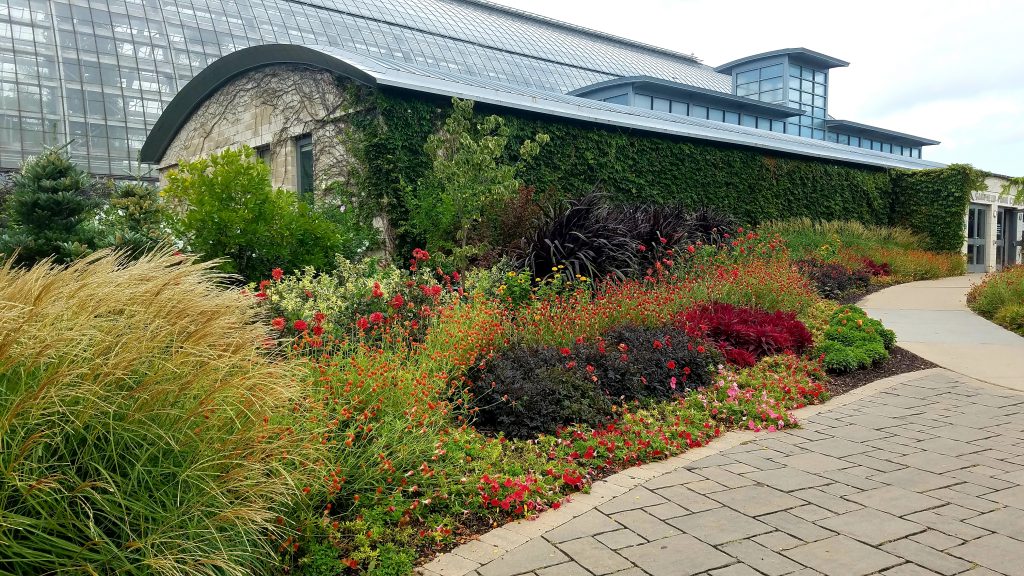 Garfield Park Conservatory is at the north end of the park, with its own entrance and footprint. Constructed in the first decade of the 20th Century, it has often been called one of the nation’s botanical treasures. Designed by famous landscape architect Jens Jensen, it encompasses 12 acres of park space. Accessible greenhouse space accounts for two acres, with the remaining ten being outdoor gardens …

The Conservatory Was Named In Honor Of This U.S. President … Click To See #ad

The original intent was to create the world’s largest public conservatory under one roof. Over the decades, the greenhouse display gardens have developed, matured, and delighted millions of visitors. Overseen and managed by the Chicago Park District, the Garfield Park Conservatory is free to the public, though a nominal $10 donation is suggested upon entrance … 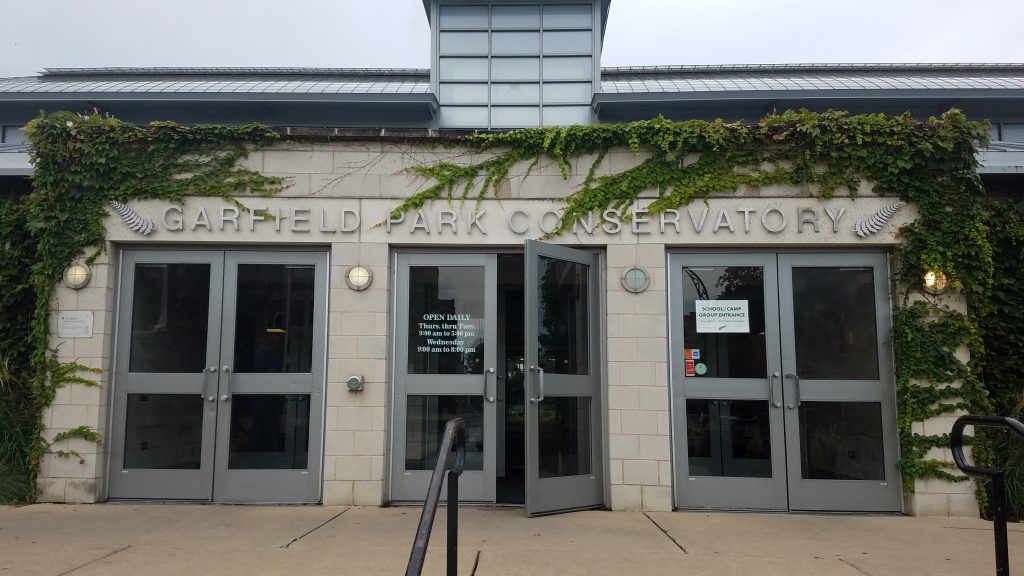 When the Conservatory was first established, the planned greenhouse gardens were thought by visitors to be part of nature, with a glass structure constructed around it. You’ll still get that same sense today as you stroll through the many gardens outlined below …


A significant part of Chicago’s spirit and history, Garfield Park Conservatory and surrounding Garfield Park are listed on the National Register of Historic Places. Every Chicago area resident should visit here at least once, and those visiting the city from points beyond should be sure to add it to their travel agenda …

My husband Jim, who isn’t passionate about gardens and gardening, marveled at the layout and lush displays both inside and outdoors of the Conservatory. He’s a lifelong resident of the Chicago area and noted the historical and cultural significance on display here. 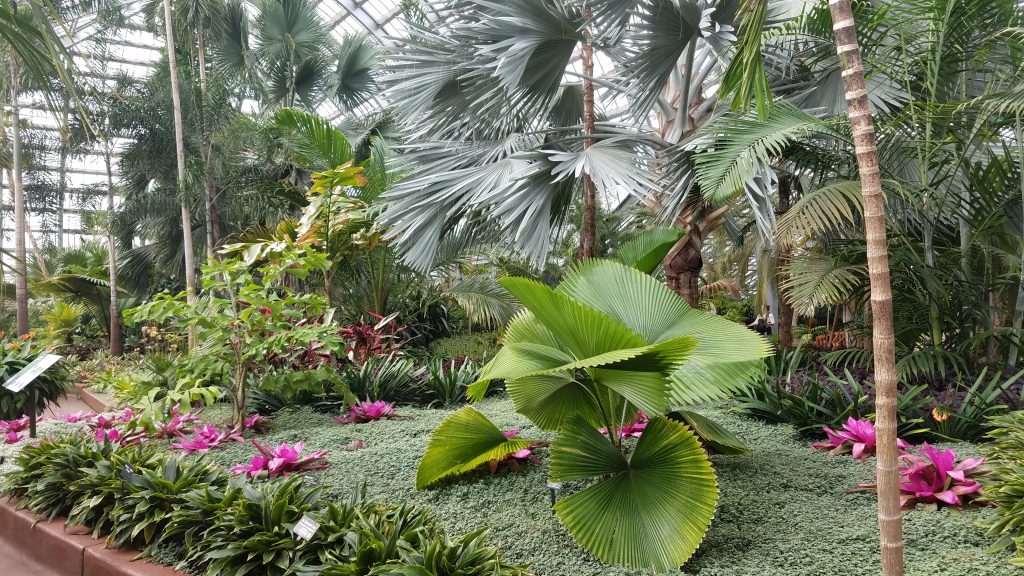 Ever evolving, Garfield Park Conservatory is also a popular learning environment for school groups. Hands on programs are offered throughout the year to encourage the relationship between youth and nature. As you would imagine, the Conservatory is a highly desirable location for special events like receptions, social gatherings, fundraisers, and much more. Be sure to visit the very well presented Garfield Park Conservatory website to see what’s on display and stay abreast of current events.

At 65 ft high and 90 ft wide, this is the largest room in the Conservatory. It’s designed as an idealized tropical landscape, featuring more than 70 graceful palms, as well as other plants from warm habitats all around the world.

In 1926, the Field Museum gave the Conservatory a seed collected on one of their recent expeditions. This seed has grown into the largest and oldest palm in the collection: the Scheelea Palm. 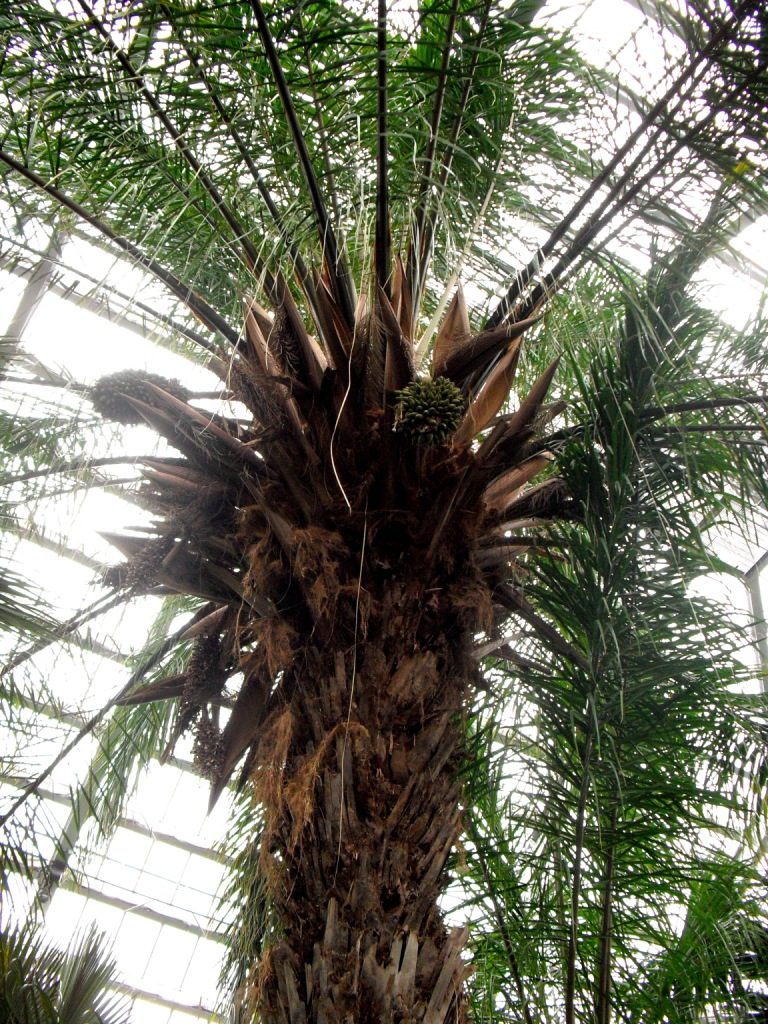 Unfortunately, its tallest fronds are already brushing the ceiling, so this palm won’t last much longer at the Conservatory. A baby Scheelea sits just north of the original and will take its place once the larger one is gone.

The first thing that captured my attention in the Palm House was the amazing foliage in contrasting shades and shapes, as well as blooming plants for an added splash of color.  Very impressive that various complementary groundcovers spread under all the palms to unify the landscape. Beautifully done! 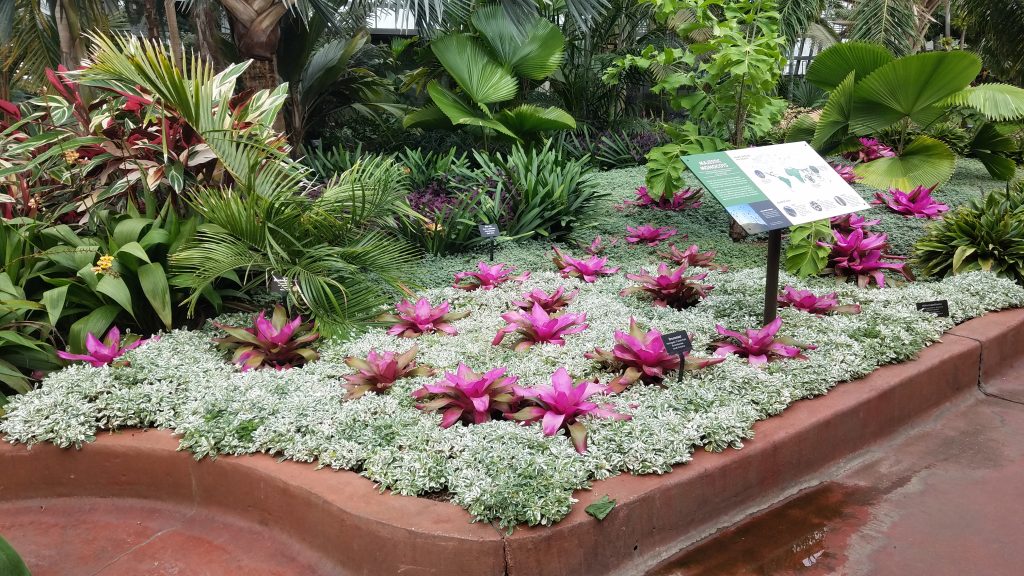 Creative use of groundcovers and foliage in the Palm House

The Fern Room at Chicago’s Garfield Park Conservatory is home to the cycads; ancient cone-bearing plants, ferns and fern allies (plants that thrive in similar conditions and emerged around the same time as ferns, such as mosses and liverworts). Many of these plants are considered primitive plants, or members of plant groups that grew during the age of the dinosaurs … about 300 million years ago.

How do ferns make baby ferns? Ferns don’t have seeds or flowers, so how do they reproduce? Spores! Fern spores are single cell organisms that grow on the underside of a fern’s fronds and are dispersed by wind. When a spore lands in the right environment, it produces a new fern- similar to the way a mushroom grows.  Now you know!  ; ) 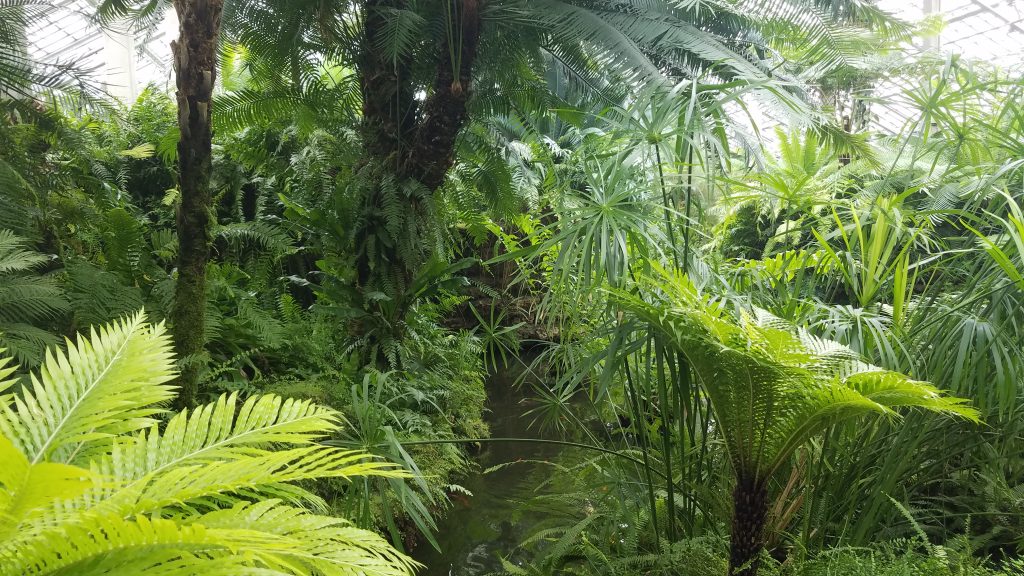 A taste of the tropics in the Fern Room

At the top of the Fern Room you will find the historic “Pastoral & Idyl” sculptures by Lorado Taft. They were originally crafted in plaster for a 1909 art exhibition in Garfield Park garden. In 1913, they were executed in marble and placed at the entrance of Garfield Park Conservatory’s Palm House.

The sculptor said, “It was my thought merely to make something graceful and appropriate for the greenhouse, something that would add to the impression of fairyland which strikes all visitors in that wonderful place. This ethereal effect was made all the more dramatic by the presence of more than one hundred varieties of orchids displayed near the sculptural groups at that time.”

The Desert House holds one of the region’s most varied collections of cacti and succulents. These plants owe their popularity to their spectacular and unique forms, the promise of brilliant, short-lived flowers and their ability to withstand harsh, dry conditions. The size of the plants in this room varies from the tiny living stone plant to the large century plants.

Most of the plants in this room are succulents, which means they are adapted to retain water, thus having the ability to survive long periods of drought conditions. Some succulents store water in their roots, others in their stems or leaves. There are plants represented from Africa, Asia, the Americas and all over the world that, in nature, would not be growing side-by-side or within such close proximity to one another.

Did you know that there is a cactus native to Illinois? It’s a prickly pear variety that has adapted to our cold winters and rainy seasons (you can find it outside the conservatory on the Bluestone Terrace). Learn something new every day!

Indoor gardeners are sure to find something familiar here, as many aroids are popular houseplants. A variety of aroids growing in a landscape setting are on display.

A spectacular feature in this room is the “Persian Pool,” sixteen yellow lily pads, which were created by the world-acclaimed glass artist Dale Chihuly expressly for the Aroid House (photo below). I remember seeing the original exhibit at the conservatory back in 2002. Just gorgeous how the glass pieces blend in and enhance the tropical displays.

Sugar From the Sun Displays

In this section of the conservatory, four themed botanical environments are showcased – water, air, sunlight, and sugar. This is the story of photosynthesis, the process whereby plants use sunlight energy to change water and carbon dioxide from the air into sugar, or fuel, for their own survival as well as the survival of all other living things.

Since plants are the only living things that can photosynthesize, all living things depend on their ability to make their own food and pass that energy along the food chain. Some of the highlights in this area: vanilla orchids, cacao (chocolate) tree, and epiphytes (air plants) hanging from above. Banana samples from a prolific tree here welcomed us … delicious and oh so sweet!

While the inside of the conservatory is a tropical wonderland, the outdoor spaces (12 acres!) include the City Garden, Demonstration Garden, Play & Grow Garden, Artist’s Garden and Sensory Garden.


Visitors can learn about community and organic gardening in Chicago in the beautiful city lot-sized working garden. Find space-saving and above-ground growing methods, composting information and a wide variety of flowers, herbs, and vegetables. The produce grown here is donated to the Garfield Park Farmers Market.

Not to be missed are the captivating aquatic gardens, with a large array of water lilies blooming in luscious hues at the time of our mid-September visit.

One of Chicago’s many spectacular visitor attractions, the Conservatory is located about ten minutes west of downtown. It’s a must see for gardening enthusiasts and anyone looking for a relaxing escape into nature. This lush, well-planned, and maintained gem should be on everyone’s Chicago bucket list!

For more information on planning your visit, please check out https://garfieldconservatory.org/visit/

Have you been to the Garfield Park Conservatory and gardens? What are your favorite areas? Please share by reaching out to us at our Contact Page … 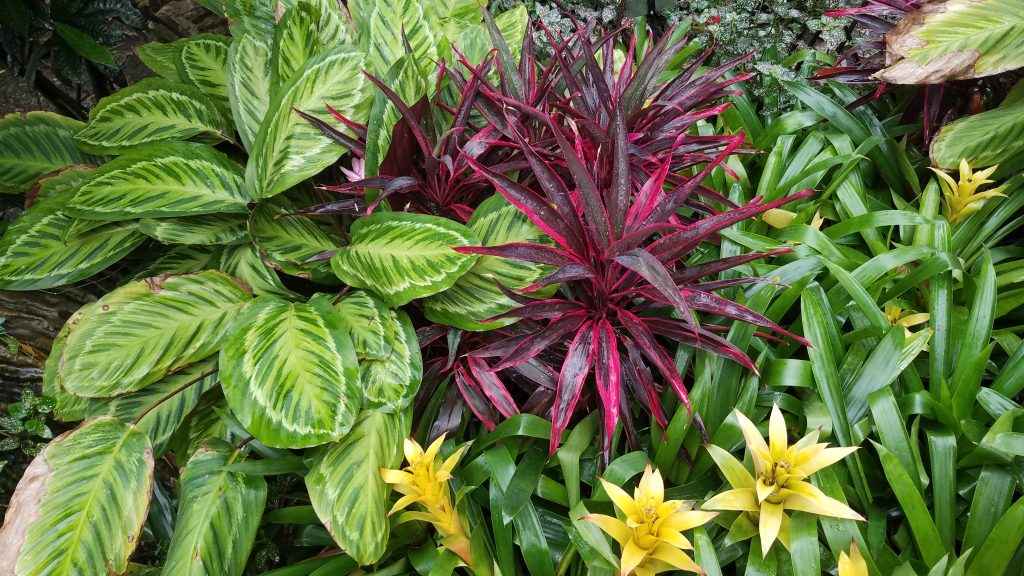 Helping gardeners in Zone 5b (west suburban Chicago area) for over 30 years! During that time I’ve become a “go to” person among friends and family for practical, straightforward gardening advice. A long time friend dubbed me “Flower Chick” many years ago and the nickname stuck! 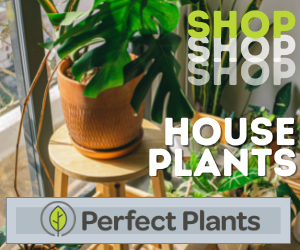 As an Amazon Affiliate we earn from qualified purchases.  Amazon affiliate text link advertisements will be clearly labeled #ad after the link and all Amazon photo advertisements are labeled as Ads By Amazon.